“Decatur, Illinois, Sunday, September 23, 1984 Page AS Central Illinois. Devil cult rumors have town talking EDINBURG (AP) Devil worship might seem an unlikely topic in a county called Christian. But at a special town meeting in this Central Illinois community of 1,200 people, that’s exactly what folks discussed. Christian County Sheriff Jack De-Clerck, who says the issue has been “blown plumb out of proportion,” said he decided to call the meeting because rumors had it that a devil cult was sacrificing animals in the Edinburg Cemetery. DeClerck said he was told the devil cult, which supposedly meets near a local bridge, was sacrificing goats, dogs, sheep and cats. But the sheriff told the 150 people at the meeting Friday night that in the past 10 days authorities have “covered this town with all the power we’ve got and we haven’t found anything.” DeClerck said someone found a cat with its legs cut off. The discovery prompted a rumor that the cat had been sacrificed. “This is my personal opinion.” ‘DeClerck said, “but I think some farmer was mowing, that cat was in his nest and the mower got him.” He also said police have talked to about six high school students rumored to be part of the cult. “They think it’s all a joke,” he said. But not all the residents have taken the issue lightly, prompting a warning from school board president Tom Hedden. “Somebody’s going to get hurt if this doesn’t shut up,” he said. Several youths questioned by police about the alleged cult were in the audience but said nothing. The mother of one of them did speak, though. “My daughter is not a devil worshipper,” she told the crowd. “If anybody’s got any proof that she is. then call the sheriff. If she’s guilty then, fine, she should be punished. But a bunch of gossip do you know what you’re doing to a bunch of kids?” Hedden agreed with DeClerck that the situation has gotten out of hand. “This is a small town, and at the beginning of it all there might be a little truth.” he said. “But at the end it gets to be full-blown rumor.” 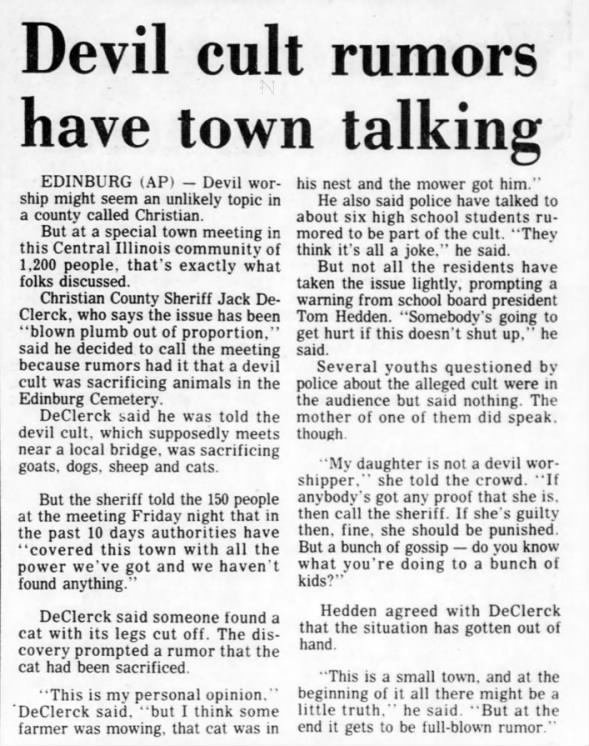 Tracie Hicks is a Speculative Fiction. You can read her work at Coffee House Writers, where she is an editor. Tracie has an Associate of Arts degree in Communications from UoPX. Bachelor and Master of Arts degree in Creative Writing (focused on fiction and screenwriting) from SNHU. She wrapped up her education with an MFA in Creative Writing from SNHU. She is working on two books and one short story collection. You can read her work at tlhicks.me View all posts by T.L. Hicks

One thought on “Devil Worshipping Cult in Edinburg, IL”

This site uses Akismet to reduce spam. Learn how your comment data is processed.